THE BOOK of DEATH (Screenplay & Notes) 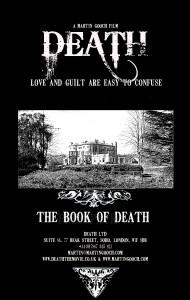 This is a book about the making of the 'Beautifully British' 100% independent feature film DEATH (A.K.A After Death in the USA/Canada).

Written and produced by Multi Award Winning Director Martin Gooch, the book follows his journey making his first feature film, including all the trials and tribulations of getting a feature film made in the UK.

This book is a MUST for anyone who wants to make a feature film or just wants to know how they are made.